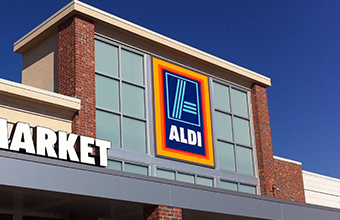 ALDI, the grocer focused on providing an easier, faster and smarter way to save on high quality groceries, opened a new Springdale store on October 20th at Springdale Plaza, just south of Tri-County Mall in Springdale, a northern suburb of Cincinnati. The new 25,875 square-foot store is ALDI’s latest store prototype.

The deal for the new lease was brokered by Andrew Feinblatt of OnSite Retail Group. Bill Cieslewicz, Managing Editor at Cincinnati Business Courier, posted a story on October 20th reporting on the upcoming grand opening of the new store writing, “Germany-based Aldi, with its U.S. headquarters in suburban Chicago, opened the store this week at 425 E. Kemper Road in Springdale, the site of a former Michaels arts and crafts store. A grand opening will be held Oct. 28.” The new store is ALDI’s latest prototype and offers delivery and curbside pickup.

Cieslewicz explained in his story, “Aldi plans to expand curbside pickup service to 500 additional stores, bringing the total number of curbside locations to more than 1,200.” As stated in a recent press release by the company, ALDI is one of America’s fastest-growing retailers, serving millions of customers across the country each month. With more than 2,100 stores across 37 states, ALDI is on track to become the third-largest grocery retailer by store count by the end of 2022.